Posted by jamrud at 9:51 PM No comments:

Posted by jamrud at 9:51 PM No comments:

From The Beautiful Mind of Melissa G.

Please meet Melissa.
﻿
You should know that I love her.  Dearly.  She has become such an important friend to me.  She makes me laugh and is willing to listen to me ramble about my complex feelings about pretty much everything.  She's awesome in every way imaginable.  And here she is to guest blog.  Enjoy.

Sara asked me a reeeeeeeeally long time ago to do a guest blog. Like, a really long time ago. I’ve started several, but as she is always so hilarious and charming in all of hers, I felt a lot of pressure. Will anybody like me? Will they scoff at my (self perceived) brilliance? I was doomed to fail from the start with these sort of expectations.

I decided that, instead of working on something witty and spectacular, I should just do an entry about a favorite recipe. The way to everybody’s heart is through their stomach, right? RIGHT?! So as such, you are about to read about my journey into the world of making fudge. Since I have a bit of hipster in me, I thought a fudge involving bacon would be a good idea. Maple bacon fudge, to be exact.

This fudge has only 4 ingredients and takes about 10 minutes to make, so no excuses! You will need the ingredients pictured (I’ll list them below as well) and a 9x9 cake pan, with the bottom covered in wax paper and enough over the sides of the pan so that you can pull the fudge out later for easy cutting. 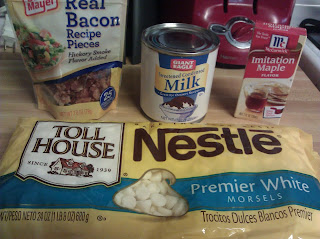 Over low heat in a decently heavy pan, melt the white chocolate chips along with the sweetened condensed milk. 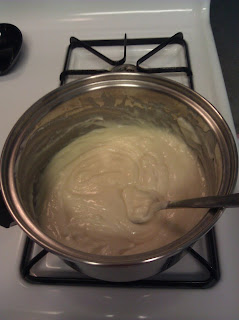 Remove from heat, stir in maple extract and bacon. Reserve a bit of the bacon to sprinkle on top. 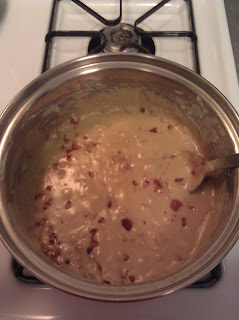 Pour into a 9x9 pan and sprinkle remaining bacon on top. 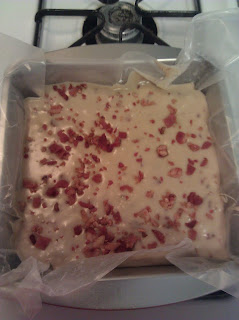 Now the hard part-waiting. I waited until it was cool-ish and then put it in the fridge and let it chill another few hours. When it’s completely chilled, take it out and cut it into squares the size of your choosing ☺

Fair warning: I have been told this is the best thing I’ve ever made and good enough to sell. I don’t tell them how easy it is, haha. Make with caution.

Posted by jamrud at 9:39 PM No comments:

Based upon a True Story, The Intouchables in one of the first truly heartwarming Moviegoing experiences of 2012. The Dramedy co-directed by Eric Toledano and Olivier Nakache, is an uplifting Portrait of Friendship and how love and compassion transcends the confines of Class, Ethnicity and Pasts. The Film centers on a wealthy Quadraplegic named Philippe (François Cluzet) and his street-savvy Caretaker Driss (Omar Sy) in the unlikeliest of pairings.
Philippe and Driss are brought together after the former injures himself permanently in a Paragliding accident. Left with little to be hopeful for, things change when Driss is hired as his Caretaker. Gradually, we see their Bond fortified, filling voids in one other's lives: Philippe - a Father-like companion and Driss – a Son-like friend. While caring for Philippe, Driss is faced with the challenge of also being present for his troubled Brother Adama (Cyril Mendy), a constant and sobering reminder of whom he is despite his new life of luxury alongside Philippe. Meanwhile, Philippe's zest for life is revitalized by Driss' infectious confidence and soon he finds himself on the verge of finding love once again for the first time since his Wife had passed away.
The Intouchables is driven greatly by the brilliant Chemistry between its two Lead Actors Cluzet and Sy. Despite their generational differences - a trigger which enables many of the Film's most hilarious moments - we truly get an opportunity to tap into the souls of these two Men and actually be a part of their Friendship. Alliance Films releases The Intouchables on June 1, 2012. Bring a Friend, take Dad.

Posted by jamrud at 9:00 PM No comments:

Posted by jamrud at 8:52 PM No comments: