Upon watching the video of Molly Palmer from Hawaii during the Big Island Invitational Marlin Tournament, her 12-foot and half-ton catch really captured my attention. However, her team has been disqualified due to some sensitive issue regarding their fishing strategies. They missed the thousand bucks for the stake but they are proud to bring home the huge marlin coming from the riches of South Pacific ocean. 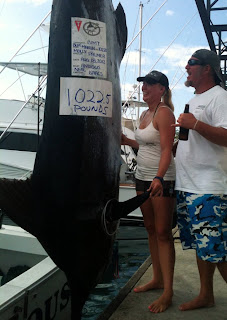 According to report, Molly will probably earned the new world record for her catch. The weight of this giant fish can make a small craft to sank and she was helped by the crew of their ship to pulled the fish aboard. And in order to qualify in the rules set by International Game Fishing Association who are the responsible people for the tournament, she need to support her catch with her idea on how she captured the giant marlin.

Furthermore, her above photo shows her loving and supporting husband making a pose in the right isle of her catch. He is probably proud for her wife who is now in the middle of disqualification issue. The adventurous woman gave her statement about her catch but nobody would like to listen during the day when her team presented this fish to the tournament officials.

And guess what, Molly noted that they are not joining the game for world record nor for the price but to take the chance for fun. The captain of their ship also gave his statement about of what happened during that time when she reeled the huge fish. He gave the woman a right position of their boat for a much easier way to hold her line.

Video of Molly and her team are now available in YouTube. You can try to look around for other important details related to this report in Reuters as well in other news sites on the line. Molly is maybe telling the truth about her struggle but for the price, that's a different story to tell, right?
Posted by jamrud at 10:47 PM