The last Wednesday, August 22, 2012 episode of Late Show is probably one of the most remarkable appearances of Serena Williams. And it is because of her stunning look which captured the attention of her fans and followers all over the country. Her red outfit gave us a reason to follow the story that stunned David as they start their conversation. 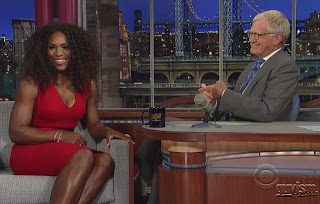 After the epic of Olympic Games, this might be the first gig of Serena next from Wimbledon tennis court. She faced Russia's Maria Sharapova in the final round from where she brought home the gold medal. David made a few line of question about of what happened during and after of that match. A shining smile from her face remind us of her successful journey in London.

Furthermore, the red dress of Serena was officially designed by Victoria Beckham matches with $4-thousand Christian Louboutin Decorapumps sandal. Her shiny diamond ring brought a few highlights from those folks who are following her appearances. They are giving their wonderful review of the show, a heartwarming way of supporting the woman in an exclusive interview.

In addition to this, Serena is up for the upcoming U.S. Open tournament starting this Monday, August 27, 2012. She is now preparing for another match with Maria and as she talked about her Olympic Gold, she is confident enough to beat her closest rival in her field of sports. Somehow, there are some funny scenes during the conversation of David and Serena that brought us a few laughter.

Join us as we continue to follow the other appearances of iconic woman in sports as she continue her journey after her Olympic career.
Posted by jamrud at 1:32 AM